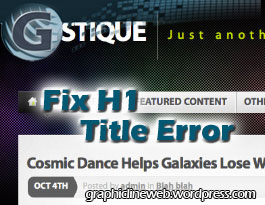 The theme places the site title and tagline inside <h1> markup for the front page and blog page.

And of course, WordPress puts the page title in <h1> markup as well – so you get 2 instances of <h1> on the site front page and the blog.

Not good for SEO. There must only be one H1 on any page.

Funny thing is, the developer has commented the theme file responsible for assigning the title markup, in the code just prior to the offending lines of script:

“only on the front/home page, for seo reasons”

Change the Code to Fix Error

END_OF_DOCUMENT_TOKEN_TO_BE_REPLACED

WordPress is a great CMS, but it has one drawback – It’s slow. A side by side speed comparison between Drupal and WordPress on the same server showed Drupal was about twice as fast as WordPress.

END_OF_DOCUMENT_TOKEN_TO_BE_REPLACED

No, it’s not a WordPress plugin conflict or bug as some ‘Pressers have believed. It’s bad behaviour by Apple devices – iPhones and iPads. These devices look for these dedicated icons by default, instead of looking for the apple-icon link in page header, and using the normal favicon if the link isn’t found. It’s annoying, unnecessary, and easily resolved (and a waste of valuable time).

Because retina icons are exactly double the size of the standard icons we really only need to make 2 icons: 114 x 114 and 144 x 144. By setting the retina sized icon to the corresponding standard icon iOS will scale them accordingly.

END_OF_DOCUMENT_TOKEN_TO_BE_REPLACED

One of my sub-sites loads 10 times faster after moving the domain to an offshore server. To be totally fair and put the improvement in perspective, the actual server is not that much faster; the big difference is route latency or lag.

Before moving the average time it took Google-bot to load a page from this site was around 1100 ms. Now, a month later we can see the improvement – average time is about 100 ms..

END_OF_DOCUMENT_TOKEN_TO_BE_REPLACED

I previously wrote about using a Text Widget without a Widget Title or Name as a way to gain a small improvement in SEO for a WordPress.com blog (see WordPress Widget Headings) by using a lower order <h> attribute than the <h3> standard mark-up used by the theme.

Some themes play nicely when the title is blank by collapsing the space used by the title if it is missing. More themes however keep the space intended for the title resulting in a large blank space that spoils the appearance of the blog. This can be fixed fairly easily using CSS styles to reposition the widget content.

END_OF_DOCUMENT_TOKEN_TO_BE_REPLACED

Here’s a brand new plugin for WordPress self hosted sites and blogs. WP CSS3 Button Creator makes it easy to generate the code needed for CSS3 buttons. While the code generation part is easy and foolproof, using this code on a WordPress self-hosted site needs a bit more effort than just installing and activating the plugin.

Users will need to add the CSS generated to their theme stylesheet, or use a custom stylesheet along with another plugin to insert the stylesheet link in the content of any page where the buttons are used.. While not difficult, this may be beyond beginners, so the plugin is aimed at intermediate to advanced users.

END_OF_DOCUMENT_TOKEN_TO_BE_REPLACED

Finally, I have a Tweet Button that opens a popup window and uses a custom button image that works. A long time in the making, the project got put on the back-burner several times over the past six months.

Yesterday I finally got round to updating my website to use several of the code snippets I published last year, (never got round to changing these either until now) so it seemed the right time to get down and make this custom button twitter share popup work.

Part of the reason it took so long was having to use JavaScript – and I am not at all fond of java… I had the popup working in several versions, one only included the page URL, another just opened a popup tweet box with nothing in it. Neither of these were what I wanted. Thanks to Twitters fairly new “Intents” API, the popup now adds the page title and the URL – much better.

These functions have long been available using Twitters own tweet buttons, but if they don’t fit into the space allocated, then a custom image is a better solution, except for the hassle to get it to work properly.

END_OF_DOCUMENT_TOKEN_TO_BE_REPLACED

A showroom, shop window, storefront display and media advertisement; meta descriptions should be used to the fullest.

Yet how often do web content creators ignore this useful tool. Content Management Systems like WordPress often do too much of the work for us, filling the meta description field with an extract from page content. Normally the description is extracted from the first paragraph, so unless we are really clever with our first paragraph, especially the first 150 characters from the paragraph, the result is a SERP snippet that poorly summarises the article content we want to draw people’s attention to.

Worse still, if a plugin has not been installed to extract this snippets, or the theme used doesn’t have this function (most do not – Thesis is one that does), the field is left out altogether. END_OF_DOCUMENT_TOKEN_TO_BE_REPLACED

Is Valid HTML Needed for SEO?

The simple answer is NO. Html that fails W3C validation does not necessarily adversely affect search engine ranking. I do not mean to imply faulty html is OK, it is not! Common reasons for validation failure are attributes not included in the standard, simply because they did not exist at the time the protocol was created, or back then caused display problems with early web browsers. HTML validation is more about consistency in displaying content uniformly across browsers and less about search engines parsing content.

Don’t take my word though, instead see what the experts have to say. Matt Cutts of Google answers the question “Is HTML validation necessary for ranking?”

WordPress SEO guru and creator of the excellent  WordPress Plugin WordPress SEO by Yoast, Jooost de Valk considers minor validation errors irrelevant to SEO  in this article “W3C Validation: why you should care, and why not” on yoast.com END_OF_DOCUMENT_TOKEN_TO_BE_REPLACED

(updated: 16-05-2012) Most bloggers by now will have heard about claiming authorship for their posts. Possibly many will be wondering how to do this with their WordPress.com blog. The instructions for using the attributes rel=”author” and rel=”me” posted on Google are possibly a bit confusing for bloggers without some HTML background – in fact without some minor changes the markup will not verify!. This article seeks to provide an easy to use solution for bloggers using the WordPress.com platform.